On impulse I sent a last minute entry to the Lumen Prize 2016. See lumenprize.com. This will also be my first year MA exhibition piece this July. 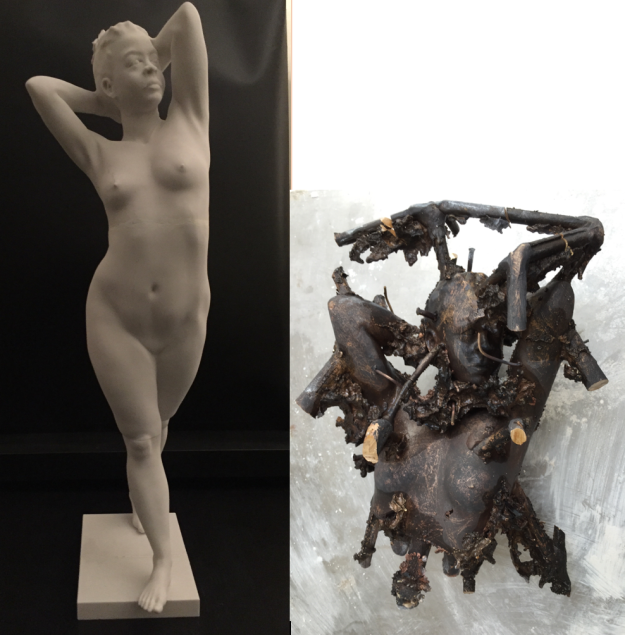 Look, Touch and Listen and you will be entranced by the humanity in this digitally created touch narrative physical artwork.

The underlying concept of ‘Metamorphosis’ is ‘Giving the Model a Voice’, an artwork of a life model that is substantially influenced by the artist’s muse as well as the artist, and includes the model Vanessa’s narrative in her own voice. This is in stark contrast to the usually silent life model setting and resultant work. Vanessa is a Laban MA trained contemporary dancer and choreographer, who started life modelling after she damaged her knee. She now models for the Royal Academy (the Royal Drawing School). The work tells Vanessa’s story in two linked contrasting sculptures that play her narrative when either is physically touched. The ‘concept of the gaze’ is thus confronted by the viewer interacting with the work, which humanises Vanessa’s nude images resulting in her quiet and emotionally evocative voice dominating the viewer’s attention rather than the visual. Their focus is now listening to her story unfold – “I started modelling because I was stressed”. The technology used is invisible to the audience as it is hidden within the sculptures which will be mounted on two transparent plinths set side by side.

The very latest digital methods (accessible to a UAL first year Fine Art Digital MA student) were used to make a full body 3D scan of Vanessa in a nude dance pose in traditional (Rodin) style and then 3D printed to make a 75cm tall plaster sculpture. The 3D print also became the starting point for the contrasting 5000 year old lost wax casting process, to make a very different hollow bronze bust of Vanessa as though she was an ancient industrial artifact recovered from the sea – representing her ‘distress’ and ‘stress’ over the period when her career suddenly changed through force of circumstance. 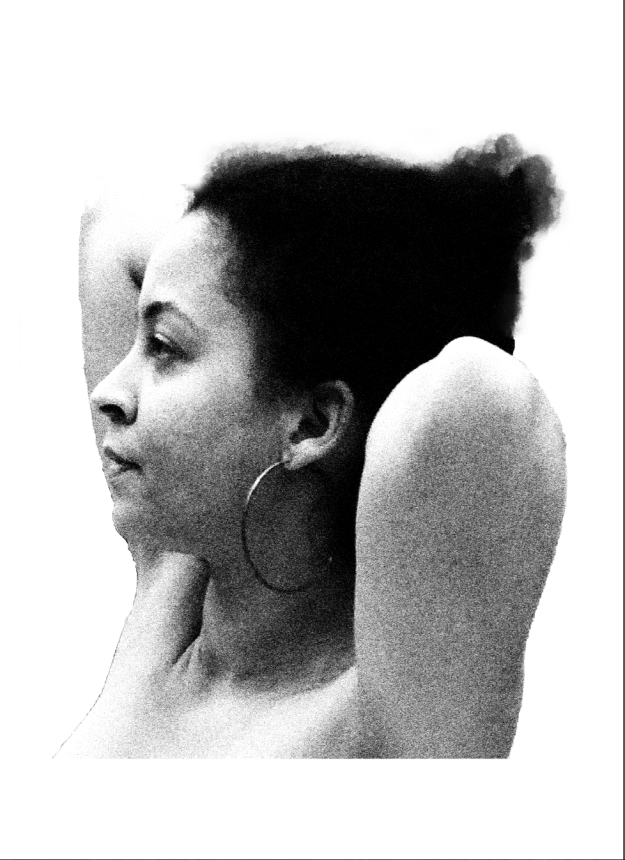 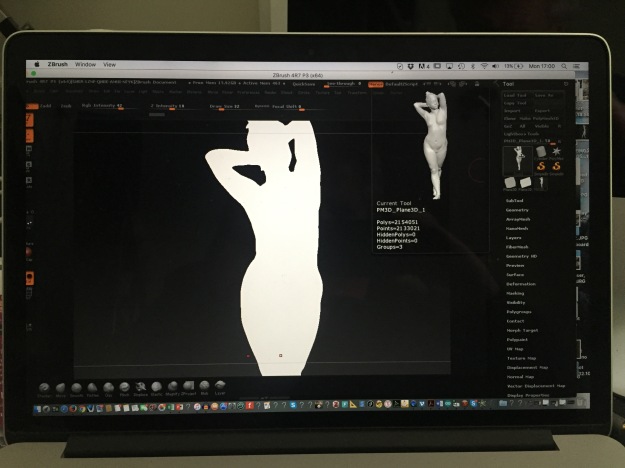 3D Print preparation – Thank you to Bill Nicholson at CSM for your much needed assistance with a tool that only £8000 can buy! 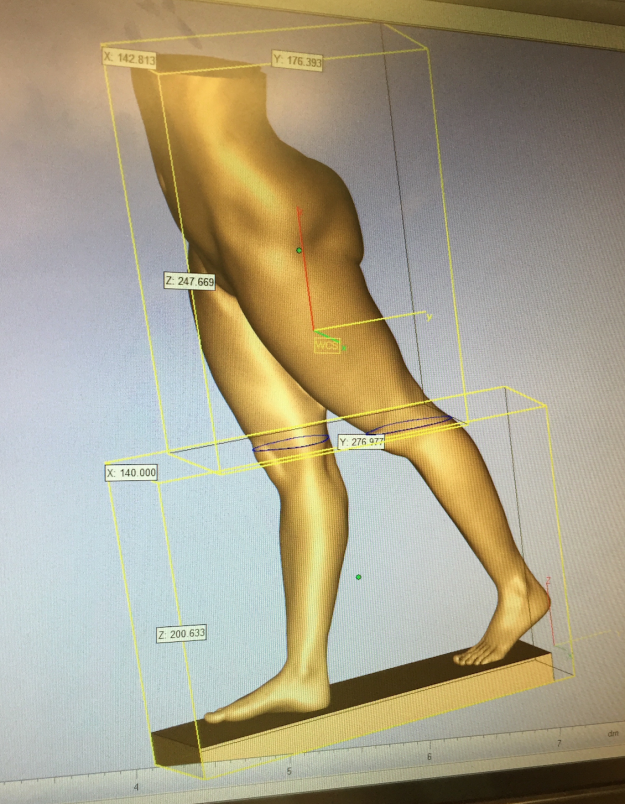 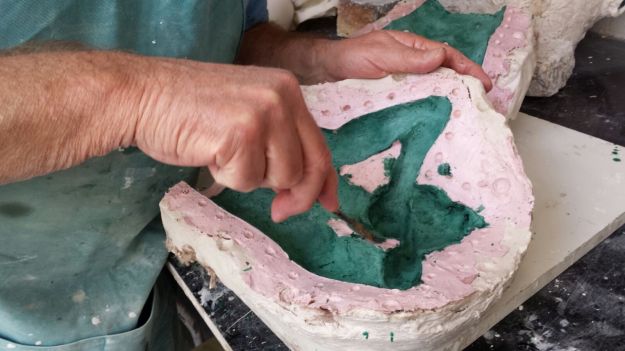 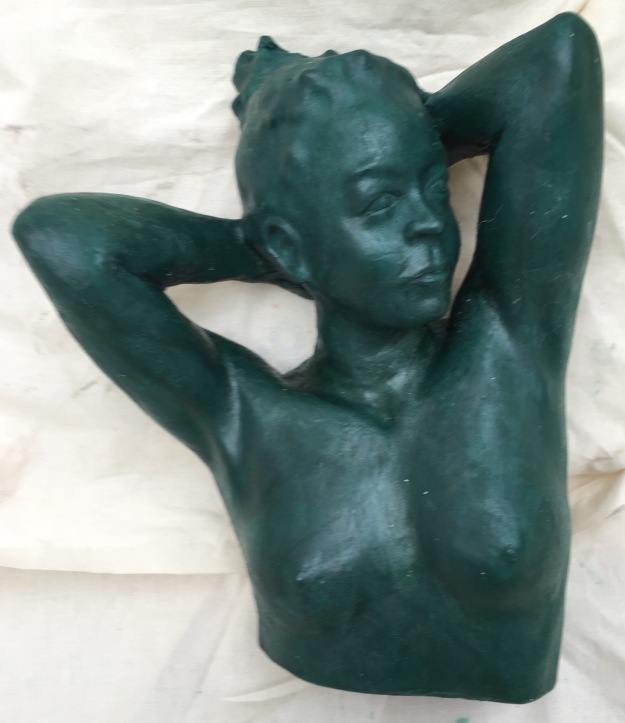 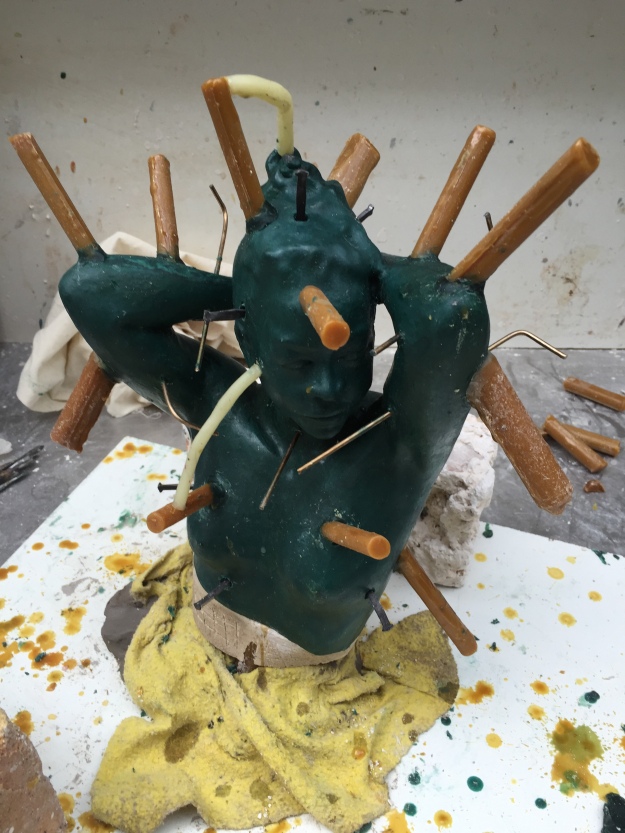 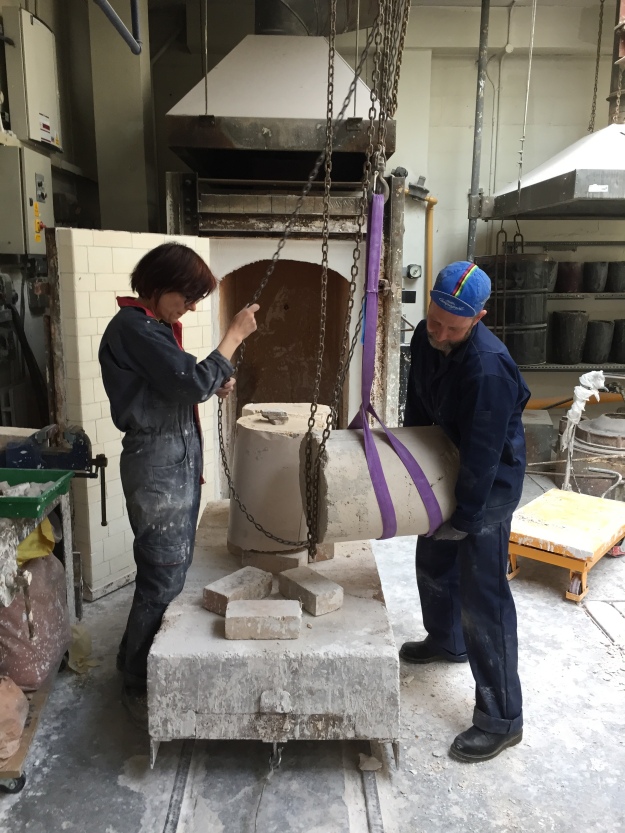 After Pouring the Bronze into the Mold 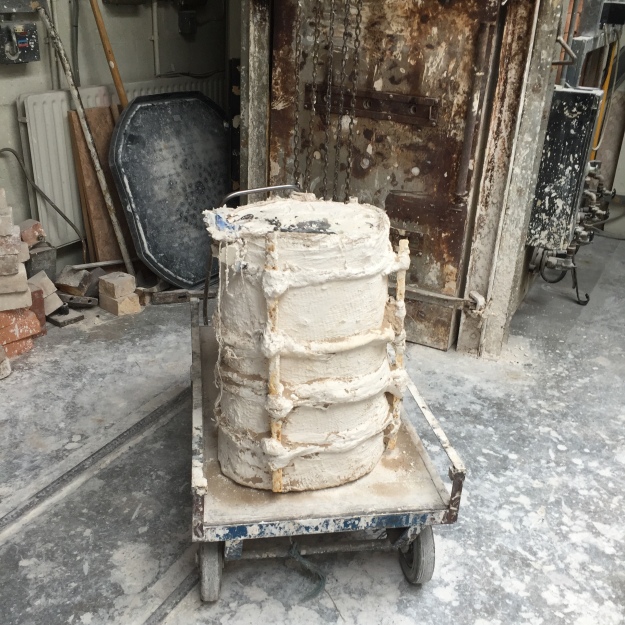 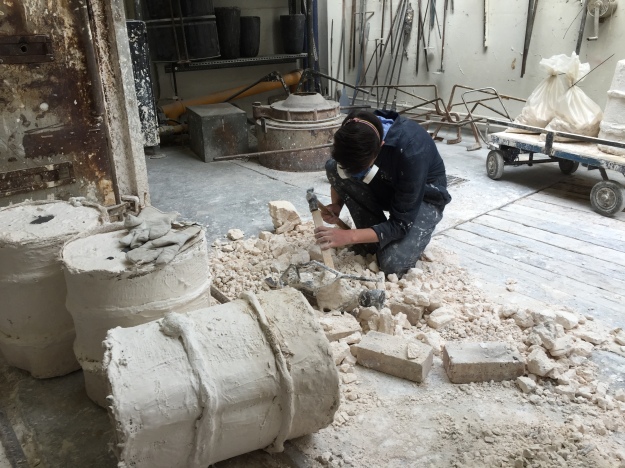 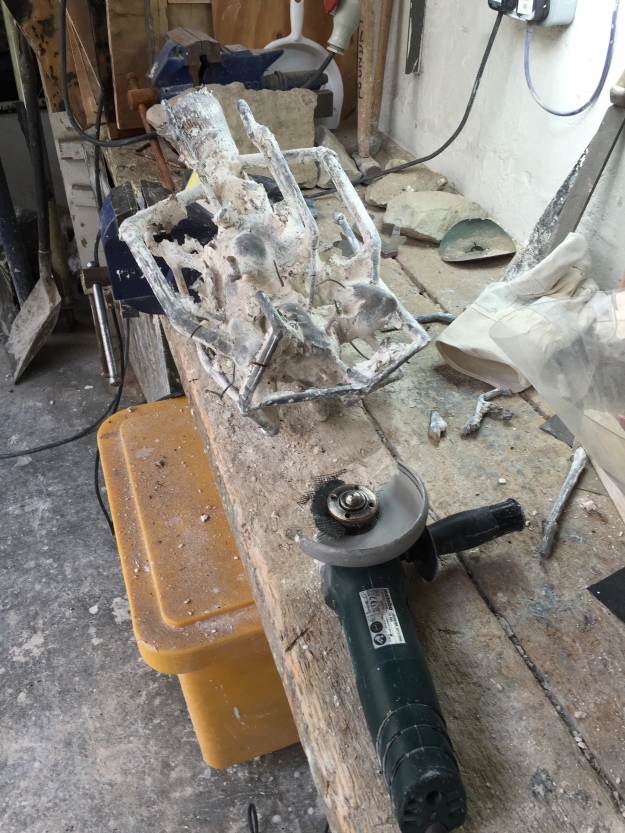 An Undignified End  –  After Jet Hosing 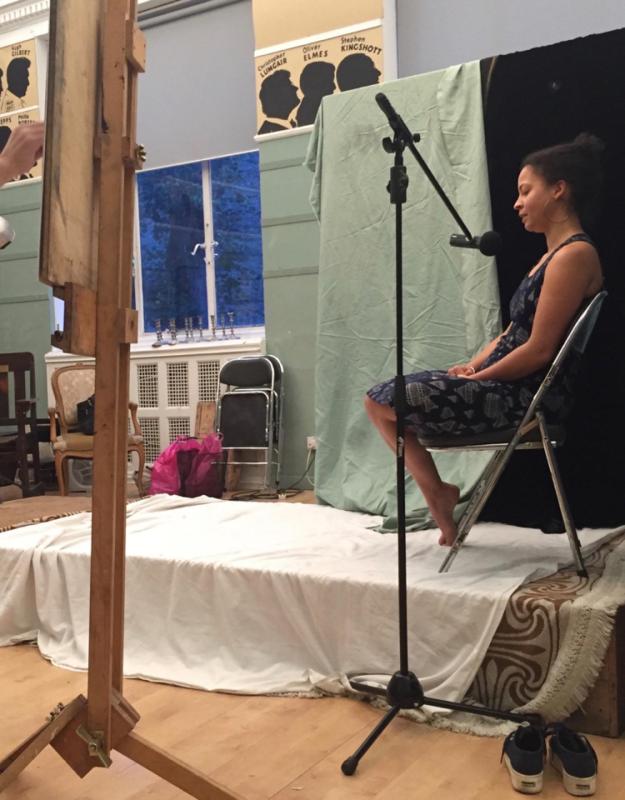 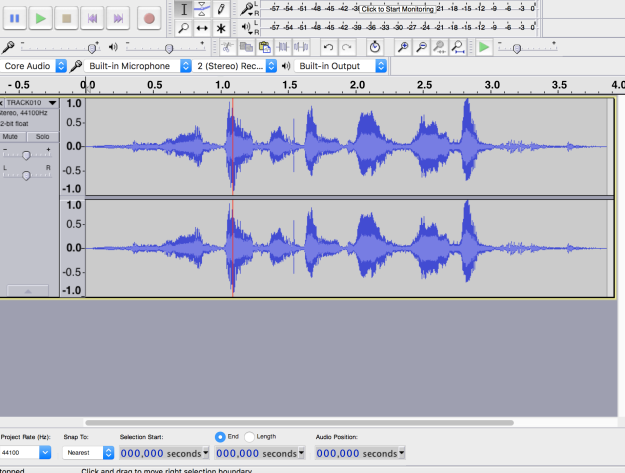 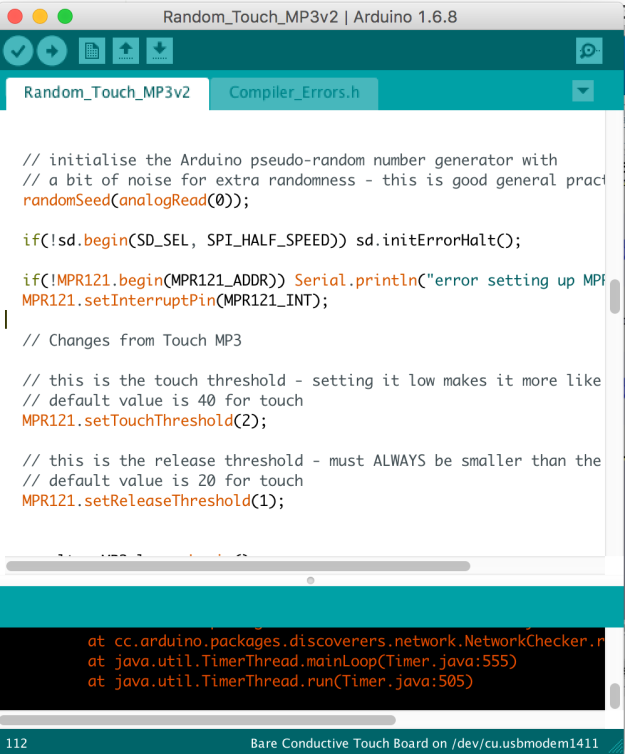 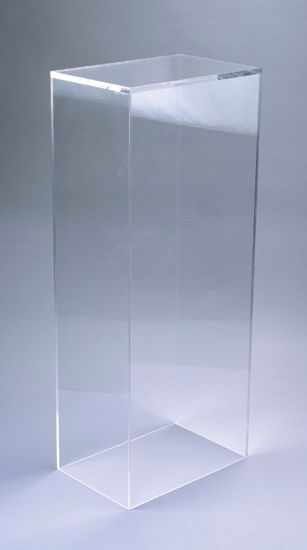 ZBrush to tidy up the 3D scan to increase the 3D image quality (re-topologise) from 200,000 to 1 Million polygons

Lost wax casting to make the bronze sculpture from the 3D printed bust. The bronze alloy used was first tested to ensure that it was sufficiently electrically conductive.

BareConductive Touch Board (a derivative of the Arduino Leonardo) to provide the proximity sensing (without external sensors to the sculptures), Bluetooth capability to transmit the recordings wirelessly, with rechargeable Lipo battery and an overall size that would fit within the sculptures

This was a comment made by Prof Stephen Farthing on 20th April after seeing my work and having explained my ‘touching a naked female sculpture’ dilemma.

I described the views of my course tutor and fellow students (at Mid Point Review on 15 Mar) and my presentations to our visiting artists (Kaora Homma on 18 Feb, and Rosie Sherwood on 1 Mar). These were largely skeptical except for a minority of my fellow students and Rosie Sherwood, and of course Stephen who at our previous meeting suggested that a nude sculpture would work better than a painting for my touch narrative exhibit.

He did however suggest some compromises to accommodate the view of my tutor (“Terry, you just cannot do this!”). Stephen’s idea was to invite the viewer to touch the head of the sculpture or possibly its shadow. I remarked that he probably didn’t realise just how difficult this was to achieve. But I said that I would have a go. He also suggested, using a theatrical analogy, that whilst I had a character and a script I did not have a performance. He gave examples of a stage set putting my sculpture at the end of Borromini’s collonade, a false perspective to make the sculpture look life size (see below), and lighting or both. 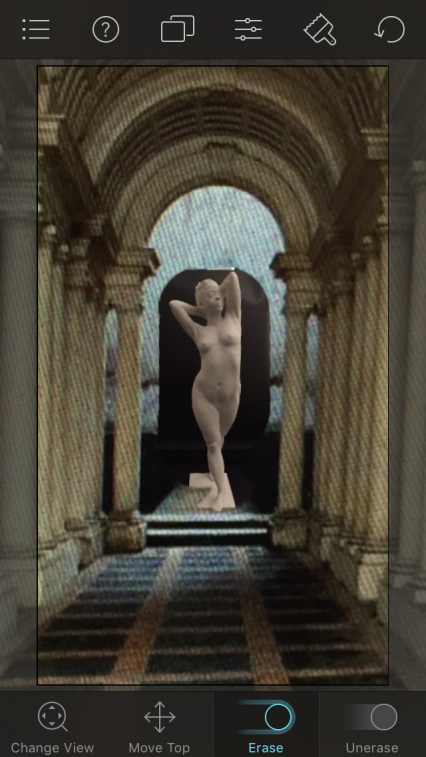 So this is what I did:

Firstly, I could not isolate touching the head of my fully assembled life sculpture without painting all of it, which I did not want to do. We had agreed that the texture of the 3D printed material was very attractive and that it would be a shame to paint it.

A second 3D print of the bust (£200 later at Digital Fabrication, CSM) was used to paint conductive material on the inside underneath the model’s hair.  But sadly the touch narrative did not work through the 3 to 5mm thick plaster. So I had to resort to learning how to change the Arduino programming of the Bare Conductive Touch Board. Shock horror! This was something I had tried to avoid at all costs and the reason I chose the pre-programmed Touch Board in the first place rather than an Arduino proper.

I had a few lessons from Grzesiek Sedek, Digital Media, UAL Wimbledon. And hey presto, I did it. And he did not do it for me! So I have learned another really useful skill. I downloaded a Sketch for the Touch Board that changed its function from a touch to a proximity sensor, and changed a parameter. to make the narrative turn off instead of keep going regardless. At the maximum setting, you can now hover your hand just above the head of the bust to trigger a narrative. And do it again to stop it. But only one narrative! So I had to download another Sketch to play random narratives and figure out how to make this a proximity sensor too. This is real coding as it it is not a standard Sketch. I had to cobble together two sketches. It took some time to get a working program. But I did this too, on my own at home, and much to my own amazement downloaded it to my Touch Board and it worked.

I can now also apply this approach to the base of the fully assembled sculpture. And to my other ongoing project – a bronze casting of the bust. This takes ages and ages and ages. I did not realise just how many steps and how long this would take. 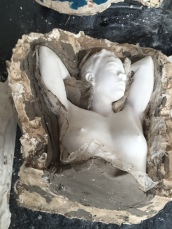 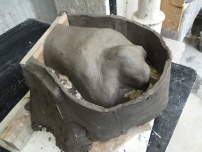 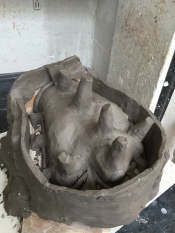 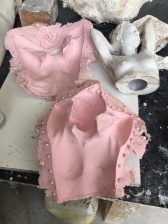 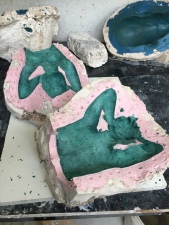 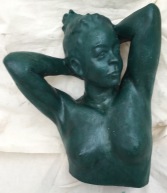 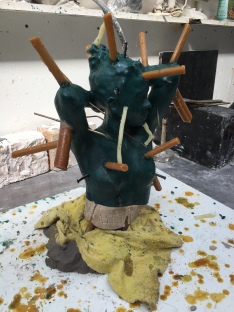 Two months later and I am ready to embed my sculpture in Grog! (a mix of plaster and already fired  ground ceramic) ready for firing and melting the wax in order to be able to fill the mold with molten Bronze. Then I have to hack off the pipes, and repair the bronze. I will let you know how that goes.

The bronze sculpture is entirely conductive so to trigger random narratives you can touch ANYWHERE.

A few more technical steps needed to be worked out and resolved. Firstly how to power the Touch Board without connecting it to my laptop or to mains electricity. Secondly how to transmit (blue-tooth) the sound (narratives) to an external sound system. I won’t go into this but job done.

Now on to the performance.

I got in touch with Alex May who gave me a few pointers how I might use Projection Mapping to create Borromini’s collonade false perspective without having to construct the arches. i.e to project them on to perspex sheets for example. Sounds hard. But I did put the first picture above together to see the effect.

I also investigated lighting within a plinth (or three).

That’s it so far. I think this will be my final year project. I have lots more to reflect on.

But I have made a decision. For the end of this academic year MA show where the first year students have a small space I will only show my triptych+ canvass – which I have yet to mount on the stretchers I have already acquired. This will be 2-3m long and 1m tall. I will not attempt to activate Vanessa’s narratives.

But I have agreed to work with Sharon on a joint exhibit. This will be or include a slip cast of the bust of Vanessa in ceramic, painted entirely in black in conductive paint, glazed and sound enabled with Sharon’s narrative. That is if the conductive paint and glaze combination survives firing. Hopefully it will.