Its been a busy week. Again…..But very enjoyable.

Nick Gorse (our dean at CCA) gave a very good lecture on Research. The main points I take on board are ‘Avoid Shallow Research’, ‘Primary Sources are best’, and ‘Stop your research in time to finish your paper’. The last was humorously illustrated by his own experience where he never finished researching (as it was so interesting), and even when he started his paper after six months and two weeks to go he started researching again (because writing his paper was so boring). He never submitted his paper because he never finished it!

At the end he generously invited the attendees to contact him if they needed help with their research and left us with his email address. I bumped into him outside after the lecture and took him up on his offer. I said that my research was ‘why traditional artists explore digital’. As primary research was best, was he proposing to invite Grayson Perry (our recently appointed UAL Chancellor) to visit Camberwell (a before and after viewing if Grayson Perry was to open the new building). Grayson is essentially a potter and Camberwell is Craft. If so could he please put me in contact so that I may understand why he produced a major work using digital means (The Walthamstow Tapestry, designed in Photoshop and produced on a computer loom in Flanders). He pointed me towards ‘Claire’ (Grayson Perry’s alter ego) on Twitter, saying he was quite good at responding. No visit then! But I will follow this up.

I am drawing blanks on finding other traditional artists who have been digitally inquisitive and are still alive. Searched for hours on the internet and only came up with David Hockney – who I knew about already – I saw his one man exhibition at the Royal Academy of Arts. Any new names for me to look into would be much appreciated. If they have a Twitter account so much the better.

I attended a ‘Painting With Light’ Introductory Workshop on Skype given by Alex May (see my previous blog and his recent exhibit at the V&A). It lasted two hours and was very worthwhile. I thought that I was recording a video of the proceedings (at Jonathan’s request) but sadly only managed to make a voice recording. You can down load his software for Projection Mapping by following the instructions on my earlier blog.

Here is a 40 second video on my set up at home ready for the workshop.

I discussed this with Jonathan at my First 1-2-1 Tutorial and suggested that if he were to invite Alex May to come to our Low Residency it would need a whole day. Two hours for the Introductory Workshop, an hour for Alex May to show his work, and an afternoon for us to use the software to projection map on to our own objects under his tutelage.

My objects are still in my room as I have not had the time to take them down!

I went to the On Your Wavelength Exhibit in a railway arch at Bankside’s Immersive Arts Festival. It was fascinating. Fortunately I went when it was not so busy (my other Fine Art Digital colleagues who attended the day before were not so lucky). So I wore the headset that measured my brainwaves and stood in the pitch black before the huge circular portal into another World where my brainwaves created a unique light show. 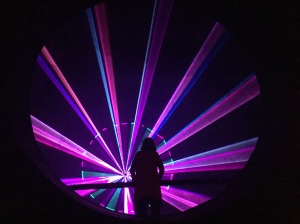 Angie who worked there and who had taken the time to explain the exhibit to me remarked on my show. She said that it made her feel happy. I said I was thinking about my family at my childhood home when I was very young (both my parents are dead and my father died when I was 13). I said that I was feeling melancholy. I then thought about something else which I am not willing to disclose.

I also attended the first of Futures Talks – ‘Animating the Web’. Interesting but not Inspiring. I think because it was three young CCW alumni talking about their business start ups and most attendees wanted to be set alight by the actual talk topic which got them there in the first place.

I was impressed that one company now employed 15 staff, kept them in work, and were still solvent. No mean achievement. I was interested how they promoted their business (See Animade.tv) by using Blogs and Social media and little other different types of marketing and asked them about this during the Q&A.

I also asked the owner of the other business (Squarespace who had innovative ways to teach coding supported by their own software) whether I could be controversial. As I got the nod, I said whilst I had experience of coding and building systems commercially (A lot – but I didn’t say that) my personal objective was to avoid coding if at all possible in order to concentrate on being creative not on the means to do so. I could achieve this by using shortcuts namely software (e.g. iClone) or examples I could easily modify (e.g Poser or Daz3D Market Place) or pre-programmed  microprocessors such as Arduino (e.g. from BareConductive). I suppose its horses for courses as another student in the audience remarked that she expected there would come a day when every child would be taught to code at school. I hope not. I prefer the HAL approach (Film 2001 – incidentally, move up one letter to the three in HAL and see what you come up with – I used to work for them) or a Robot (Film Ex-Machina) but then they did get emotional and kill their users!

In the pub afterwards Alejandro and I had a long interesting discussion (granted after several pints!). We expected more both of the Futures Talks and of the Dean. UAL has a huge reputation in the art World. If Oxford and Cambridge can invite the president of the USA to talk or debate why can’t we get World renowned Artists to come to our events?

I think after three pints we both said that we would club together and try!

1 thought on “A Lecture, Workshop, Exhibition and Talk”