My exhibit is based on the book ‘The Optician of Lampedusa’, by Emma Jane Kirby, BBC European Correspondent, who also made a short documentary report for BBC Radio on which the book was based. It is published by Penguin, and was shortlisted for Waterstones book of the year 2016. I have used it with the permission of the author for this educational project, who said that she would very much like to attend the private view of the MA show. I hope that she can make it. I am also meeting her to discuss the project after she has finished covering the upcoming French elections for the BBC in mid May.

This project plan is very much a first draft, that I will use to discuss with all the parties involved, including my fellow MA Fine Art Digital students when we start to plan our MA show as a whole.

Include fall back plans for all stages

Meeting with filming, sound and script advisors (start before 16 March when Leo, the ‘refugee’ is 3D scanned). This should include consideration of the final show set up set up in its allocated place and space available. A schedule needs to be agreed in advance. 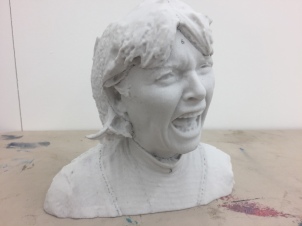 3. Creation of life-sized head and shoulder sculptures of the narrators

STEP  2 – Make background video of seagulls underwater with Vuze camera, transitioning on repeat to refugees’ heads in the water