The range of projects our on-line group are undertaking is amazing. I do not quite understand some of them but no doubt all will be revealed during the course of our studies and conversation. For example, to quote a passing comment in this tutorial, ‘I just pushed to the CDN, so hopefully it has updated the interwebs’ is sadly meaningless to me, but obviously enlightening to Jonathan and perhaps to all of my fellow students.

It reminds me when I first started a long career in IT – whenever my colleagues went to the pub after work all I could understand during their conversation was the in between bits like ‘the’ or ‘therefore’! But I got there in the end and no doubt eventually in turn confused a lot of other new recruits with my own IT jargon, so I guess I will get there too with digital art speak.

David’s work is concerned with hybridity. For my benefit I quote his explanation: hybridity is ‘the marriage and blending of different worlds and exploring the anxiety and/or harmony that can be produced: the ground vs. the figure; execution in digital vs. analog medium; abstract hard-edged geometric chromatic color fields vs. multi-colored textured grounds’.

He showed us some recent work which involved using his own code to turn his doodles, or weaved yarn into a digitally textured pattern, and even turned one into a new art brush for Adobe Illustrator. He uses Drawbot to achieve this and Patrick suggested he could also use SketchApp. Finally David applied Adobe Illustrator to amongst other things manipulate the image to produce his finished work. Affinity designer was suggested by Jonathan as a much cheaper alternative to Illustrator, and Leonie thought that you would get even better finished results with Photoshop. So that’s at least most of my group that deeply understood what was going on. The words used, which began by creating a barrier to my understanding, however become much clearer when I saw the work. Very clever stuff.

I was up next with ‘Giving the model a voice’. Please see my previous blog for an explanation which I won’t bore you with now by repeating here. I very much go along with Prof Paul Coldwell’s approach to communication. When starting his recent lecture to all the Camberwell MA students he said (I paraphrase) that he prefers not to use the specialised vocabulary and phrases of  art academia. So please forgive me if I follow his example (I am not sure I could do otherwise).

I received a lot of feedback about the viewer touching parts of the body in my painting.

David raised the interesting prospect of a random narrative by touching the same part of the picture. If I was as familiar with coding as David, Patrick and Leonie perhaps I could attempt this good idea. However I have deliberately chosen the BareConductive touch board because it does exactly what I originally proposed without coding. Later Leonie said that it had taken her several months to get to grips with Processing in order to do her work. Perhaps for my final exhibition I may have conquered Arduino programming enough to be in a position to adapt this piece of work to use a random narrative.

Jonathan offered some welcome comments on the zoom H1 audio recording device I have chosen which he said is very good and very easy to use. I can also easily plug in a cheap ‘Lavalier mic’ into the zoom H1 and place it near to the mouth to pick up the more focused sound of Vanessa’s voice that I am looking for.

Leonie and Katerina were very interested to see how I connect what my model says to what area is touched (although David suggested that the touch board can operate at a distance). I had not thought of that, but it depends whether Vanessa picks up on this in her narrative. Perhaps I will mention this to her. Leonie also helpfully suggested a book – The Senses of Touch: Haptics, Affects and Technologies to help research about the connection between the recordings and the body parts. 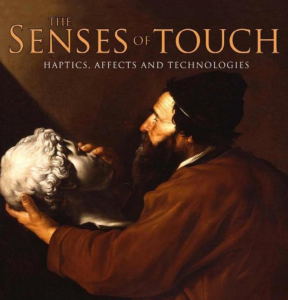 I said that I was used to drawing rather than painting, and both Leonie and Jonathan raised the question of whether I am sure I want to ‘paint’ in a different style to what I am used to? Leonie
thought that my charcoal sketches would be very tactile and maybe they could be allowed to be ‘touched’ too, even though she might smudge the painting and get charcoal over her fingers! That is resolvable but charcoal is not a good conductor of electricity and that is why I am using a derivative – conductive black paint. It may be different if I was drawing in graphite which is very conductive but this will not achieve the effect I am trying to produce particularly at a life size scale. Jonathan suggested using conductive paint over a photograph. A good point which I may have to resort to if I fail in my attempt at painting Vanessa in a minimalist style following guides for my mark making in black and grey tones on a white canvas with the help of my digital art projector. This should hopefully make this painting easier for me. I am determined to try.
Patrick’s current exploration is ‘of what nowadays constitutes an interface?… and of taking various inanimate objects or physical elements across the threshold into the digital realm’.
He has made a perspex (deliberately chosen so you can see through it) box of earth. When you press on it it generates one of hundreds of numbers, which can, using a microprocessor such as an Arduino, produce many different sounds or images. He also did something similar with leaves, touch and sound but on a small scale which he wants to enlarge by including other parts of the tree each with their own speaker eventually to fill an entire exhibition space. All I can say is WOW!
I have yet to complete this blog with Sarah and Leonie’s work, both of which are extremely interesting and so different from that of everyone else. I also can’t wait to hear about Katerina’s too which because of time had to be held over to next week.