This first project is one of a series showing the progressive adoption of digital technology in my life drawing practice. ‘Giving the model a voice’ aims to make the model part of the work not just the object of it. Instead of silence during the pose, and when the viewer sees the work, my aim is to literally bring this drawing to life by the inclusion of the model’s narrative in her own voice and thus her personality into the picture. Her name is Vanessa and she is a classical dancer. 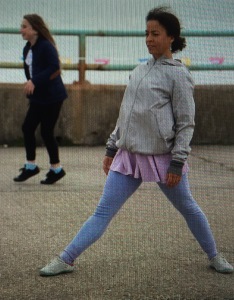 Vanessa will record her thoughts and feelings before, during and after the modelling session. She can say anything she likes. Perhaps, mentally adding things to her shopping list while she poses, or berating her boyfriend in her head for forgetting her birthday, or going through steps in her mind for her next dance performance. The plan is for an everyday narrative, not a serious statement. But it’s up to Vanessa to decide how she wants to portray herself in the artwork (and she will be jointly credited for it, alongside myself as the artist). Vanessa says that she thinks deeply about a lot of things when she poses. Snippets of Vanessa’s narrative will be played when the viewer touches different parts of her portrait.

I will be having a practice voice recording session in the Digital Media Department (with help from Tim, our resident sound expert) to test for the optimal way to achieve the best quality. This is scheduled for Wednesday 28th October. I will then need to teach Vanessa how to use the voice recorder (its not easy!) as she will take it home with her between studio sessions. Before that I will need to understand how to use it myself, so it is coming with me on holiday to Spain tomorrow (where I will be during our on-line Crit session next Tuesday afternoon!). 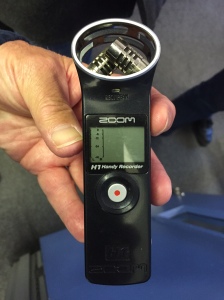 Tim will also assist me at a later date when I need to edit the recordings to divide the narrative and transfer them to micro cards. These will be inserted into micro card readers attached to a pre-programmed Arduino linked to my hi-fi.

So we start with a life drawing in the Cheyne Drawing Studio in Chelsea which is booked for our sole use together with the resident art tutor on 30th October and again on 5th November. I will draw Vanessa in mainly black and white in charcoal and white pastel on a sheet of A1 or A2 cartridge paper or gunmetal coloured card 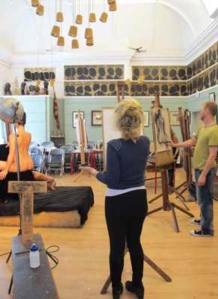 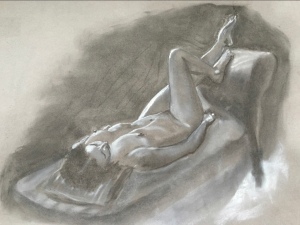 After the Cheyne Drawing studio session the portrait will be blown up to life size by projecting a photograph of it on to an oversize canvas. I will then mark out the areas I want to paint. I am still unsure where to get the canvas from as the largest I have been able to get from Cass Art is big but not big enough. Then I have the problem of eventually transporting it from home to Camberwell. Perhaps instead there is a CCA studio where I can produce the painting on the very large canvas, and store it there until it is needed for the next Camberwell MA Exhibition in July 2016? 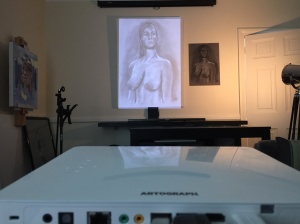 I have decided to make the final portrait in an Art Nouveau (ish) style. Part of the reason for this fairly minimalist style is that it is sensitive to both the model and viewer as parts of the painting will be touched and the experience is less voyeuristic than it might have been if the original true to life drawing was used directly. It also lends itself to painting isolated areas in conductive paint.

I will then paint the picture and hopefully it might come out something like this. This is the hard part for me! I have never done anything quite like this before. I usually draw not paint. 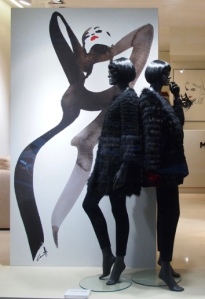 Each area of conductive paint will be connected through the canvas to a terminal and it’s associated micro card reader attached to the Arduino – which will be hidden behind the floor standing picture.  When each area of conductive paint is touched by the viewer the Arduino will send a different narrative of Vanessa’s recorded voice direct from the associated micro card reader to my hi-fi. This pre-programming is already inbuilt in the Arduino supplied by BareConductive (thank you again Grace Attlee, first year MA Illustration).

This is the reason I acquired the Arduino from BareConductive as it saved me from having to learn to program it in Processing (see previous blog). I will of course test this entire set up on a small canvas before attempting to start the large painting. I will also talk to Patrick at BareConductive who Grace advises can tell me about various techniques for painting with conductive paint (as Henry Ford once said about his cars – ‘ you can have any color you want as long as it is black’). My Bare Conductive starter kit with extra paint and micro card readers can be seen below. 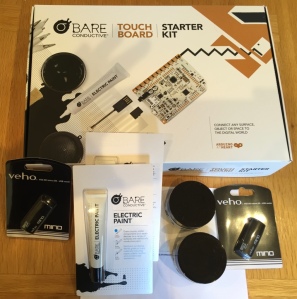 So lots of toys to learn to play with and hopefully I will produce a great piece of digital art work. My very first. Here goes!