I am grateful to my fellow online students who, following the video presentation on my proposals for my MA, made some useful research suggestions which were also endorsed by Jonathan. These were works by the artists Isaac Cordal and Karin Sanders.

I found their exhibits very varied and not all to my taste. Some pieces however were very interesting for putting my work into context with that of other established artists.

Isaac Cordal’s  work displayed in October 2011 at ENCUENTROS DIGITALES in Madrid was most relevant. See link http://cementeclipses.com/Works/918/. The picture and text below are quoted verbatim from the display. 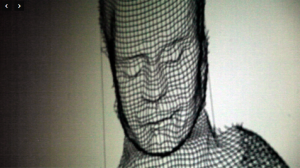 “The feature comprised of three visages (shaped from pieces of metallic grid mesh wire) hanging from a motorized cable spinning horizontally. At first these installations seem regular but by looking closer it becomes apparent there are small optical confusions caused by the form of the objects projected shadows. Through an LED light positioned a few feet away from the hanging features, the light passes through the wire mesh, constructing facial outlines that are cast out as its shadows are projected in a large window of wall space centrally located in the darkened room. The projections become an interesting drawing that recalls a 3 dimensional representation of a computer constructed model. The movement of the pieces confuses the human perspective due to its projection having concave and convex forms. This work I have tried to carry out of the simplest form to try to reduce to the maximum the use of technology.”

This work alludes to a 3D computer constructed model and could be seen as similar to my idea of projecting a 3D painting in 3D. However, my idea is to paint on an actual computer 3D mesh so that it looks like a conventional (non photo-realistic) life drawing or portrait which can be viewed in 3D in various ways (without 3D glasses) including a holographic display. Thus I aim to confront and use to the maximum the technology that Cordal hoped to avoid or minimise. I want to explore the extent to which digital means can be used to make and present my art, primarily of the life model.

Closer to my objective is some of the work of Karin Sanders presented at GALERIE HELGA DE ALVEAR, Madrid in March/April 2000.The pictures below are from the exhibition, and the quotation is verbatim a description from a contemporaneous article by Charles LaBelle (with much of the critical review omitted – he was not very keen) in Issue 51 of Frieze magazine.

“Sander’s exhibition was titled simply ‘Escala (Scale) 1:10’. Throughout the two rooms of the gallery, Sander presented 50 figures, each rendered realistically in plastic and shrunk to one-tenth their normal size. Frumpy housewives, chunky businessmen, a football player, a ship’s captain, a couple of kids, a bald man and his blind wife, a middle-aged guy in jeans, a diva in a purple gown, a Gen-X girl in bell-bottoms, all stared out from their individual acrylic cases, frozen like inhabitants of a sci-fi force-field. Indeed, the show, at first glance, reminded me of an old Star Trek episode in which an alien race has collected various species from across the galaxy to populate a high-tech zoo.

Fabricated out of acryl-nitryl-butadien-styrol by Glats Engineering in Germany through a sophisticated process of 3D body-scanning and ‘fused deposition modelling’, the carefully airbrushed figures are incredibly intricate. Small details, from crow’s feet to shoelaces, are precisely moulded. Only the striated surfaces give any hint of their digital origins.

Hand-picking her subjects, Sander allowed each to represent themselves as they wished, to choose their own attire and stance. Yet, participation also entailed an act of submission which necessitated an especially close engagement with the artist – one that seems more akin to that of doctor/patient than artist/model – involving a journey to a factory in Germany and a ten hour scanning procedure.”

The technology has changed a lot since 2000. Each of Sander’s subjects was subjected to a 10 hour scan in a specially technically constructed space. My scanning uses a hand held device and takes minutes anywhere using cloud computing. The construction of each model in plastic was a very expensive process and broadly equates to low cost 3D printing facilities available today. Nevertheless, Sanders is presenting a (clothed) life model in a similar way to my 3D sculpture in sliced MDF.

My intended presentation of this work is different to that of Sander’s. It will be part of a collection of differently made and displayed works progressively illustrating how digital technology can extend the artistic representation of the life model beyond traditional life drawing or painting. In this example the sculpture will also be painted with light using a technique called ‘projection mapping’. I am not sure that Charles LaBelle would approve!

Thanks again to my student colleagues and to Jonathan for stimulating my interests in these artists.